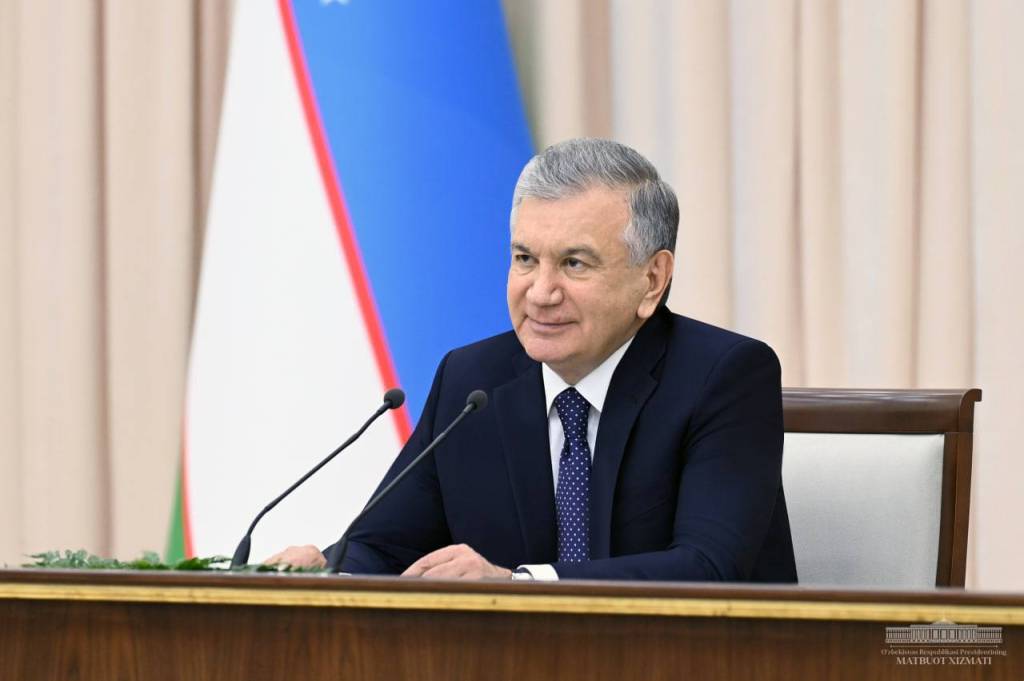 Navoi hosted an extraordinary session of the Regional Council of People’s Deputies.

The President of Uzbekistan Shavkat Mirziyoyev took part in it.

The Head of the state expressed deep respect for the residents of the region and suggested holding a meeting in the form of an open dialogue.

“Our biggest goal at today’s meeting is to openly exchange views. We need to find a solution to issues concerning 330 mahallas, 1 million 50 thousand residents of Navoi region. Dear deputies, representatives of the older generation, young people, you will do me a favor if you tell me what worries you, what problems are there at places. If we, consulting with our people, find a solution to all issues, there will be a result”, Shavkat Mirziyoyev said.

The current state of development of Navoi region was analyzed during the conversation. Over the past three years, large industrial projects worth $2 billion have been launched in the region. As a result, more than 10 thousand new jobs have been created, an additional 1 trillion UZS of tax revenues and $100 million of exports per year have been provided.

It was noted that the region has large reserves and opportunities for further economic development. For example, local entrepreneurs can produce imported products based on cooperation. The livestock industry is not fully involved in agriculture. There are few containers for storing fruits and vegetables. There are social problems concerning the population.

The organizational issue was considered at the meeting. The President recommended the candidacy of Normat Tursunov for the post of Hokim of Navoi region.

Normat Tursunov was born in 1972 in Tashkent region. He worked for many years in the state tax system. Since November 2021, he has been acting as Hokim of Navoi region.

Before starting the discussion on the candidacy, the Head of the state proposed to hear about the candidate’s program. Normat Tursunov presented his plans for the development of entrepreneurship, industry and agriculture in the region, as well as the creation of decent living conditions for the population.

The President approved these proposals and identified measures for their implementation.

To develop entrepreneurship next year, the task has been set to create 26 local industrial centers and small industrial zones, allocate 600 billion UZS for family entrepreneurship programs. It was emphasized that, in general, Navoi region has every opportunity to become a region without poverty and unemployment.

In the industrial sector, 186 projects will be implemented next year with the creation of 15,000 jobs. This will become an essential factor in reducing imports and increasing exports to $250 million.

In Khatirchi, Karmana, Navbakhor, Qiziltepa and Nurata districts, 72 mahallas specialize in growing potatoes, vegetables, grapes and pomegranates. The Head of the state noted the need for improving the water supply on 5,000 hectares around these mahallas.

The main attention was paid to the development of the social sphere, the construction of schools and kindergartens, the provision of housing and drinking water to the population. In general, in 2023, an additional 655 billion UZS will be allocated to solve the social problems of the region, and another 750 billion UZS will be allocated for the development of family entrepreneurship.

After the presentation, the deputies of the Regional Council discussed the candidate’s plans and expressed their opinions. The issue of appointing Navoi region’s Hokim has been put to the vote. According to its results, Normat Tursunov was approved as the Hokim of Navoi region.

The Head of the state stressed that the plans announced at the meeting should be effectively implemented. All agencies should unite around the Hokim and serve the people.