Delegation led by the Ambassador Extraordinary and Plenipotentiary of the People's Republic of China Jian Yang visited Fergana region and held a number of meetings.

At the meeting with the regional khokim Sh.Ganiev, issues of attracting Chinese investments, strengthening cooperation of entrepreneurs were discussed. An agreement was reached on establishment in China of a representative office of the khokimiyat of Fergana region.

A meeting was also held at the regional department of Uzbekistan Journalists Creative Union. 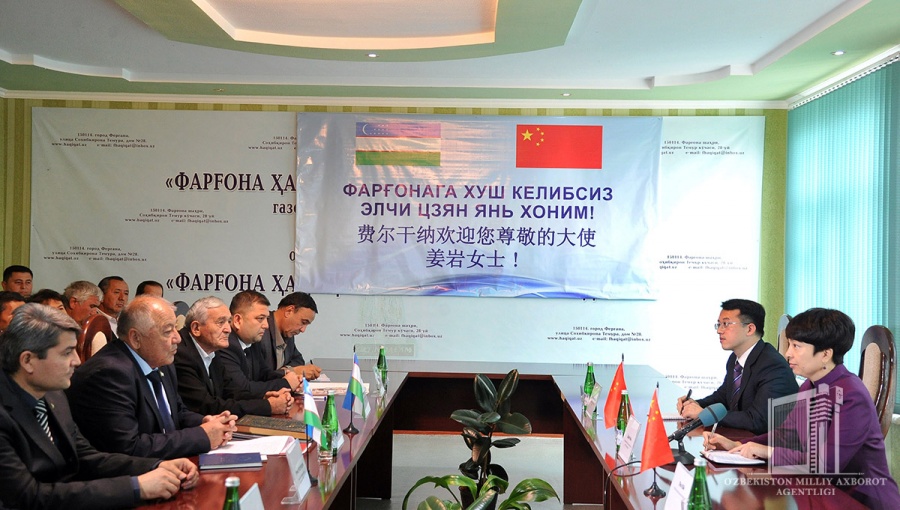 Ambassador of China noted that cooperation between the television of provinces of Shandong and Shanxi, the CCTV-4 channel of the Central Television of China and Fergana journalists has practical results. They agreed on organization in the future of journalists’ media tours in Fergana region and Shanxi province. Projects for holding “Dono” publishing house’s competition “Do you know China?” and publishing children’s magazine “Bilimdon” in Chinese were fully supported.

The China’s Ambassador also visited Fergana State University, where they exchanged views on development of cooperation in the sphere of education. It is planned to open Chinese language courses at the university.

The guests visited the joint venture “Moderna ceramic industries Fergana”, the LLC “Narimtex” in Margilan, became familiar with activities of these enterprises, their products, export opportunities.