The first meeting of the Senate of Uzbekistan’s Oliy Majlis took place in Tashkent on January 22.

President of the Republic of Uzbekistan Islam Karimov took part in the session.

Heads of government bodies and agencies as well as mass media representatives attended the event.

As the legislation of the country stipulates, the Chairman of the Central Election Commission of the Republic of Uzbekistan Mirza-Ulugbek Abdusalomov opened the first session of the Senate. Later on, members of the Senate elected an ad hoc secretariat for the first meeting and a group overseeing the use of electronic system of vote, and approved the agenda.

It was pointed out at the occasion that the Senate has been shaped on the basis of democratic principles of openness and transparency, and in full compliance with the requirements of the national legislation. 84 senators had been elected during corresponding joint sessions of deputies of the Jokargy Kenes (Supreme Council) of the Republic of Karakalpakstan, representative bodies of government of regions, districts and cities. 16 members of the Senate were appointed by the President of the country.

It was stressed also that the Senate is formed from among the eminent citizens with great experience and particular services in science, arts, literature, production and other spheres of public and social activity.

The President of Uzbekistan Islam Karimov delivered a speech at the session.

The head of our state noted in particular that ten years ago we had turned our unicameral parliament into a bicameral one. Thus, we have formed the Legislative Chamber that works on a constant and professional basis, and the upper house – Senate that functions as a legislative body of territorial representation, and established an order whereby representatives of Uzbekistan’s all 14 regions – the Republic of Karakalpakstan, provinces and the city of Tashkent – are elected from among the deputies of regional, district and city Kengashes (Councils). 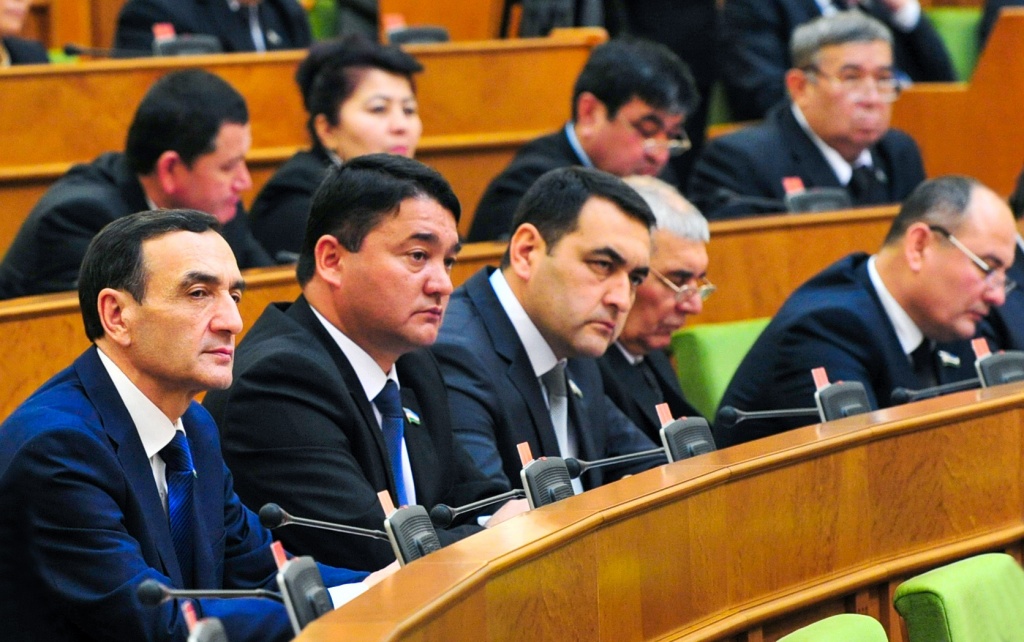 Taking into account the centuries-old rich history of our native Uzbekistan as well as its originality and geographical peculiarity, each of the 14 entities constituting the country has its own historical and socio-economic differences, its unique culture and traditions. And the life itself requires that we never forget about this, Islam Karimov stressed.

Given this fact and deriving from the objective laws of the evolution of our economy, when elaborating and approving our plans to meet the needs and interests of each region – be it province, district or town – it is imperative first of all to take these specifics into consideration.

Second, when instituting a bicameral parliament, we had set out to create a system of checks and balances aimed at effective realization by the parliament of its powers, at making well-balanced and thoroughly thought-out decisions.

Third, given the fact that the Legislative Chamber functions on a constant and professional basis, it was envisaged to substantially raise the quality of lawmaking in the parliament, bedrock of the contemporary parliamentarianism.

Fourth, because the Senate is composed by and large of representatives of local Kengashes and represents the entities of Uzbekistan, it was envisioned to secure the balance of nation-level and region-level interests.

Fifth, to further enhance the scope of population participation in the socio-political life of the nation, it was decided to shape the upper house, the Senate, from among the deputies of regional, district and city representative bodies.

If every deputy of the lower house of the Oliy Majlis, the Legislative Chamber, works on the elaboration of legislative acts on the professional basis, that is, lawmaking, then you, members of the Senate, should evaluate, first of all, the laws being passed from the viewpoint of the interests of the region, strive to secure balance in these issues, and remember that you are representatives of not only a given region, but also the entire people of Uzbekistan, the head of our state asserted.

From this perspective, President Islam Karimov insisted that senators always remember the immense role and significance of the Senate and at the same time its responsibility for further elevation of the quality and effectiveness of the bills passed.

As it is known well, from the moment when the bicameral legislature started to operate in the country, some powers of the President have been passed on to the Senate. The latter has been granted the right – on the basis of recommendation from the President of the Republic of Uzbekistan – to announce amnesty, address issues of appointment and dismissal of diplomatic agents and Uzbekistan’s other representatives in foreign nations.

Furthermore, the Senate is assigned with parliamentary oversight of the activities of bodies of the executive branch. It reviews annually the drafts of national budget, oversees the latter’s execution, organizes hearings of reports of heads of government agencies.

Currently, the Senate has embarked on wide-ranging efforts to uplift the effectiveness in the activities of local Kengashes of people’s deputies, to hold elections to citizens’ self-government bodies on a high democratic basis.

In a word, Islam Karimov said, the Senate has proved capable of taking profound and thoroughly thought-out decisions for the last ten years on important issues concerning the lawmaking and nation-building.

Yet, the speediest ever changes taking place in life, challenges of enhancement of democratic reforms undertaken by us across all walks of social and public life demand that we continue to perfect the activity of the Senate.

The President of the country proposed to discuss these issues in detail at the forthcoming joint session of both houses of the Oliy Majlis.

The meeting participants deliberated on issues pertinent to the organization of the activities of the Senate.

In accordance with Article 93 of the Constitution of the Republic of Uzbekistan, President Islam Karimov nominated candidates for the post of chairperson of the Senate and deputy chairpersons.

The senators elected Nigmatulla Yuldashev Chairman of the Senate of the Oliy Majlis of the Republic of Uzbekistan by secret ballot.

As it was stated at the time of vote, Nigmatulla Yuldashev was born in 1962 in Tashkent, and is a lawyer by occupation. He had served as the Minister of Justice of the Republic of Uzbekistan from 2011.

Members of the Senate then proceeded to elect the deputies of the Chairman. Thus, Svetlana Artikova became Deputy Chairman of the Senate.

Artikova was born in 1962 in Uchkurgan District of Namangan Region. In 1987, she graduated from what is now Tashkent State University of Law. For many years she worked in public prosecutor bodies of Uzbekistan. In 2010-2014, she was Chairwoman of the Senate Committee for Legislation and Judicial Issues. From 2014, Svetlana Artikova served as Deputy Chairperson of the Central Election Commission.

In accordance with Article 86 of Uzbekistan’s Constitution, one of the deputy chairpersons of the Senate is a representative of the Republic of Karakalpakstan. Under this norm, senators elected Musa Erniyazov as Deputy Chairman of the Senate by secret ballot.

At the first meeting of the upper house, its members set up committees of the Senate of the Oliy Majlis for budget and economic reforms, for legislation and judicial issues, for defense and security, for foreign policy issues, for science, education, culture and sports, for agriculture, water management issues and environment. They also elected their chairpersons. Furthermore, they set up a Senate Commission for Regulations and Ethics.

Corresponding resolutions of the Senate have been adopted on all issues considered.