Uzbekistan is widely celebrating the 80th anniversary of the First President of our country, an outstanding state and political figure, the great son of Uzbek people Islam Karimov’s birth.

The opening ceremony of the monument to Islam Karimov was attended by Heroes of Uzbekistan, scientists and artists, representatives of public, youth of Kashkadarya region.

President of the Republic of Uzbekistan Shavkat Mirziyoyev delivered a speech at the ceremony. 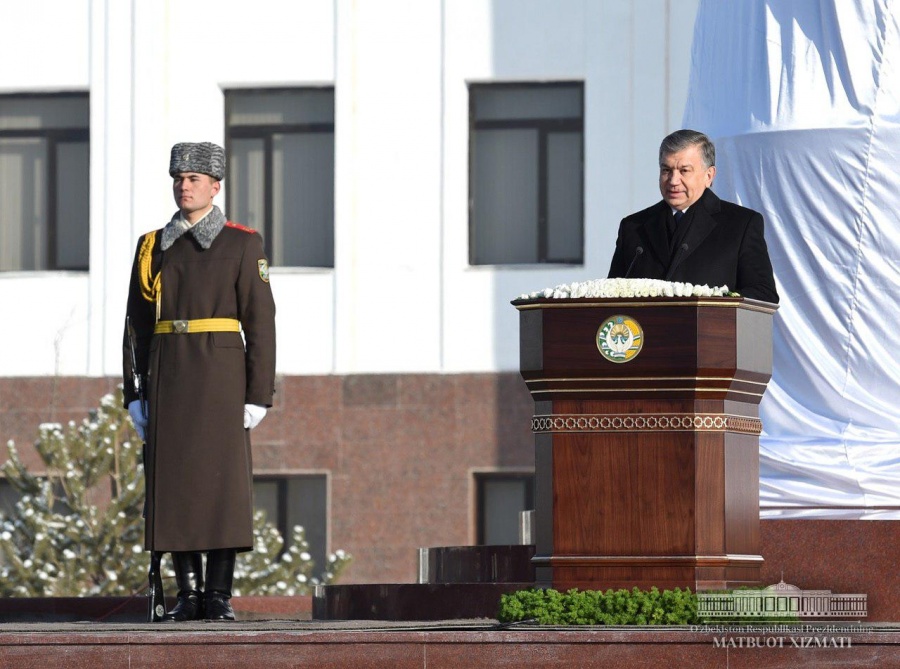 The First President of Uzbekistan worked in Kashkadarya region for several years. He worked tirelessly for developing the economy of the region, raising people’s well-being. Residents of the region, representatives of the older generation with gratitude recall his dedication, good initiatives, great care and attention.

President of the Republic of Uzbekistan Shavkat Mirziyoyev and the spouse of the First President Tatyana Karimova opened the Monument to Islam Karimov, laid flowers at the foot of the monument and paid tribute to his memory.

An outstanding political leader Islam Karimov, who developed the concept of building a modern legal democratic state, based on a market economy, won great authority not only in Uzbekistan, but also in the world community.

The colossal reforms started by the First President of the country are consistently continuing today under the leadership of Shavkat Mirziyoyev.

Large-scale activities have been implemented in Uzbekistan on perpetuating the memory of the First President of Uzbekistan. Republican Charitable Public Foundation named after Islam Karimov was established. The mosque, located on Fargona Yuli Street of Yashnabad district in Tashkent, is called “Islom-ota”. Large-scale activity has been implemented on creating a museum of Islam Karimov in Samarkand. Tashkent State Technical University, the automobile plant in Asaka, Palace of Arts in Fergana, Tashkent international airport, central streets in Tashkent, cities in the Republic of Karakalpakstan and regions are named after Islam Karimov. His monuments are erected in Tashkent, Samarkand and Karshi.

Participants of the ceremony noted that Islam Abduganiyevich Karimov treated residents of Kashkadarya region with boundless love, turned the region into a blossoming oasis, devoted his whole life to serving Uzbekistan and that his bright memory will forever remain in the hearts of our grateful compatriots, our entire people.

Today the foot of the Monument to Islam Karimov is covered with flowers.

Representatives of the general public paid tribute to the memory of the First President.