On October 31, President of the Republic of Uzbekistan Shavkat Mirziyoyev held a meeting to discuss macroeconomic indicators, the implementation of fiscal policy, the projected execution of the national budget by the end of the year, and corresponding parameters for 2020.

Worth recalling that on 22 August 2018, President Shavkat Mirziyoyev signed a resolution envisaging measures to ensure transparency of budget data and the active participation of citizens in the budget consideration process.

In order to further promote the openness of budget data, the resolution outlined a new procedure for the consolidation of parliamentary and public control over budget expenditures.

Starting from 2020, this system provides for the adoption of the state budget in the form of a law as well as control over its implementation by people’s representatives. In the draft budget law and Budget Memo submitted to the legislature, the state budget will be presented openly and in accordance with international standards.

Normative acts regarding the national budget will be adopted by the Oliy Majlis, while local budgets – by the local councils of people’s deputies. In addition, expenditure items are to be approved not in the sphere-bound form, but in the context of ministries and agencies. In addition to increasing the independence of government agencies, their responsibility for cost-effectiveness is being strengthened.

Another attribute of the new system being introduced is a course towards a phase-out of the centralized budget policy. Thus, to bolster the revenues of local budgets, fees from the registration of motor vehicles, for example, are transferred there. Earnings from excise tax on alcohol and the provision of mobile services are to be redistributed among regions based on the size of their population. The revenues from value added tax and corporate income tax accumulated in excess of the forecast indicators will remain completely at the disposal of regions.

From 2020, funds from additional revenues of local budgets will be allocated to spheres approved by local kengashes. Only urgent expenses will be approved by the khokimiyats, who will subsequently have to report to the kengashes on the targeted spending of these funds.

The meeting participants analyzed in detail the main macroeconomic indicators of the country’s economy, forecast parameters for the next year, internal and external factors that may affect the economic performance.

According to international experts, of the International Monetary Fund in particular, the global output this year will grow by 3 percent, which is 1 percent lower than foreseen. Economic growth rates are also declining in Uzbekistan’s major trade partners. Competition in the world market intensifies, trade wars are keeping on. These factors cannot but have an effect on our national economy.

The President noted the need to take these risks into account when determining macroeconomic forecasts and state budget parameters. 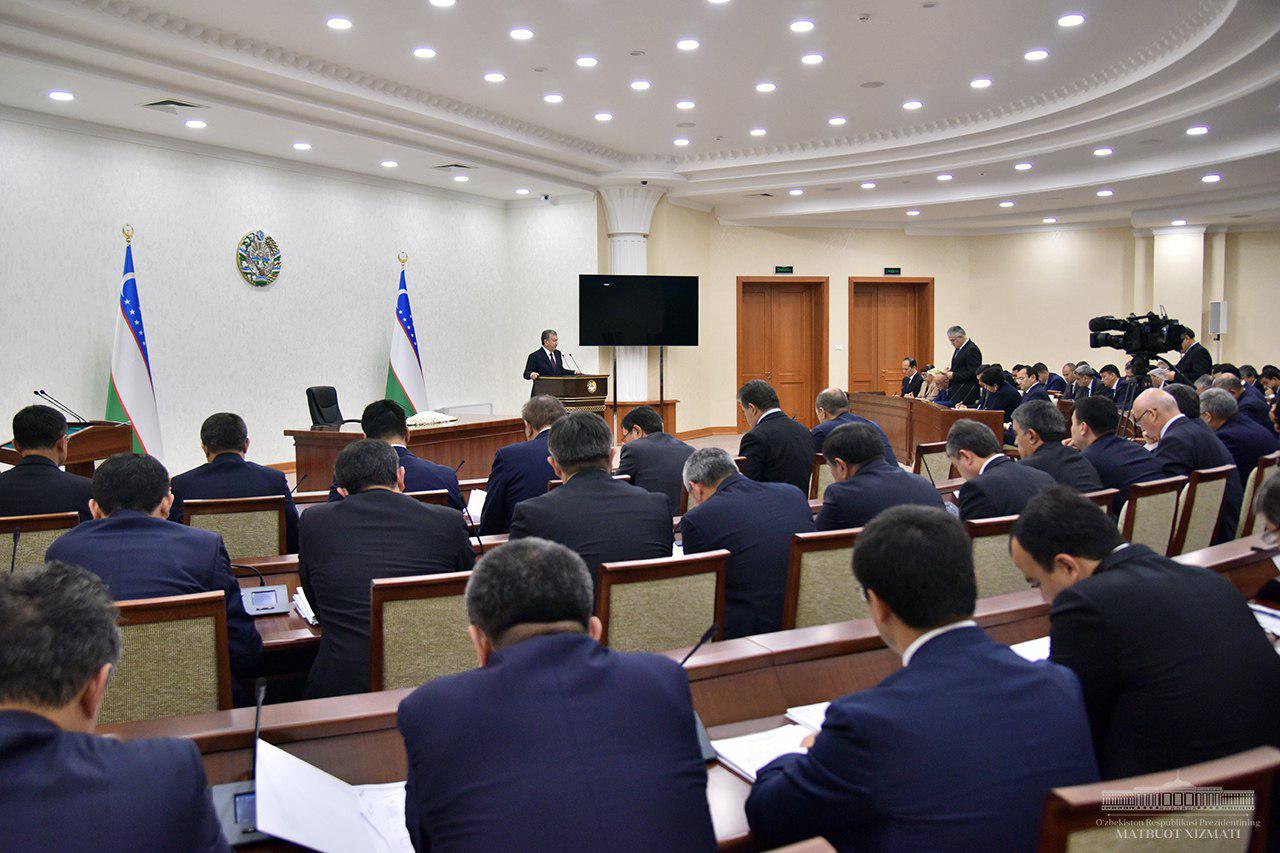 “Over the past two years, everything has been done to support sectors of the economy and boost their competitiveness. I am wondering what industry has taken advantage of these opportunities and increased labor productivity, ensured the competitiveness of goods and growth in the share of finished products in the export structure. Regrettably, one can hardly say that any industry has worked well and demonstrated remarkable result”, Shavkat Mirziyoyev said.

The meeting participants stated that systemic problems in economic sectors and inflation, whose level is not decreasing 16 percent, negatively affect the solvency of the population.

“Our main task is to boost citizens’ incomes by creating decent jobs. The economically active force is in abundance in regions. They want to earn money, work to improve their living conditions. To provide for this, we must enhance production volumes and ensure economic growth, thus raise the solvency of the population and promote stable demand in the market”, the Head of the state insisted.

For example, as it was noted at the meeting, owing to the realization of more than 100 critical investment projects for the production of confectionery, finished meat and dairy products, juices and soft drinks, it is possible to secure consumer demand and stabilize inflation.

Another factor influencing inflation is high production costs. In this regard, responsible officials were tasked with analyzing the cost of production in all enterprises with a public share, modernizing and expanding capacities, and, if necessary, transferring them to the private sector.

It was emphasized that the result of the implementation of 153 major investment projects in the next year should be not so much the commissioning of production capacities as such, as their contribution to the gross domestic product and employment.

Shavkat Mirziyoyev pointed to the fact that 23 enterprises set up in recent years are barely working at full capacity, while a number of projects have not been completed on time.

The Cabinet of Ministers was tasked with forming a permanent working commission responsible to work out investment projects that will contribute to economic growth, bump up export potential, enlarge budget revenues. The government was also instructed to regularly deliberate on such projects and performance indicators.

The meeting served to analyze the structure of exports, the situation in foreign markets and the positions of Uzbek enterprises in them.

It was noted that gas, gold, silver, copper, zinc, polyethylene and other crudes still account for more than 50 percent of the country’s exports, and work is underway to establish production and exports in sectors requiring cheap raw materials.

For example, the leather and footwear industry in our nation has the export potential for at least 1.5 billion US dollars, yet currently this figure scarcely reaches 200 million USD.

The Ministry of Investments and Foreign Trade and Uzcharmsanot (Leather Industry) Association have been tasked to double the volumes of exports by setting up deep processing of raw materials and expanding the production of women’s shoes and bags, sports equipment and other types of finished leather and haberdashery goods.

The exports of textile products over the past two years have doubled and reached 1.6 billion USD, but almost half of this volume is yarn. In this respect, the Ministry of Economy and Industry and Uztuqimachiliksanoat (Textile Industry) Association were instructed to broaden the share of finished goods in exports.

The export market of fruits and vegetables today is estimated at 205 billion dollars. The share of our country in this market does not reach even one percent.

The Ministry of Agriculture and the company Uzbekoziqovqatholding (Food Industry) were advised to gradually shore up export volumes to 5 billion USD, by rationally placing crops in 55 areas specializing in horticulture and by organizing cooperatives along the chain “procurement – purchase – storage/processing – exports”.

Mechanical engineering and electrical engineering goods are of high added value and enjoy steady demand. However, Uzbek enterprises in these industries have thus far failed to cash in this opportunity. Therefore, responsible officials were urged to promote trade with neighboring countries and multiply exports two- to threefold.

Noting the active inflow of investments over the past three years and the growth in regional financing, the Head of the state indicated that the focus should be on the effectiveness of each dollar drawn as investment.

“Let the executives firmly realize that without accurate calculations, clear feasibility studies, not a single project will get a green light for funding”, the President stated.

Shavkat Mirziyoyev noted the need for establishment of a commission chaired by the Prime Minister to monitor the effectiveness of projects implemented through external loans, and to hear reports from the departments responsible.

Tax reforms implemented at the initiative of the President have been showing positive indicators in revenue growth, also confirmed by international financial institutions.

In continuation of these reforms, the VAT rate was reduced from 20 to 15 percent from October 1 of this year, and a number of benefits were canceled. And from 1 January 2020, the single social payment rate levied on enterprises with a state share will be cut from 25 to 12 percent. Thanks to these measures, a total of 12.8 trillion soums are expected to remain at the disposal of taxpayers in the coming year.

The President instructed the State Tax and Customs Committees to make sure that the budget receives funds in the volumes projected for 2020. The Head of the state pointed out the necessity of improving tax administration through the widespread introduction of advanced technologies such as electronic invoices, new marking, and online cash registers. Directives were given to shape a vertical management system in the customs authorities, accurate assessment of the value of imported goods, widespread use of risk analysis and other cutting-edge methods.

Shavkat Mirziyoyev stressed the need for special attention to reduce the tax burden, as it will have a positive impact on the economy and welfare of people.

The expenditures part of the budget for 2020 was thoroughly discussed at the meeting.

Next year, it is envisaged to uplift assignations from the national budget to the social sphere. Thus, spending on the healthcare system will grow by 18 percent, on the education sector – by 10 percent, science – by 47 percent compared to this year. Moreover, about 100 targeted programs are intended for realization to support education, healthcare, entrepreneurship, agricultural development, infrastructure improvement and other areas.

It is projected to allocate 1.3 times more funds for providing the population with medicines, thrice more for children’s sports programs, and fourfold – for geological prospecting programs.

Particular emphasis will be placed on the introduction of water-saving technologies in cotton cultivation and horticulture, and the purchase of agricultural machinery.

The Head of the state noted that when spending budgetary funds, vital priority should be in compliance with financial and budgetary discipline. The main criterion in this case is the result of each soum invested in the economy. The Ministry of Finance and the Accounts Chamber were instructed to determine the target indicators of the programs funded from the budget and to devise a procedure for evaluating their implementation.

In order to bolster the financial independence of khokimiyats, the President said, the territorial financial bodies must be transferred to the structure of local government bodies.

The meeting participants also identified tasks for the elaboration of a three-year investment program for road construction, irrigation, land reclamation, and other areas.

Shavkat Mirziyoyev noted the need for introduction of the draft law on the State Budget for 2020 into the Legislative Chamber of the Oliy Majlis, taking all the recommendations and conclusions into account.