Agricultural workers – strong pillar of life and our existence

On December 9, a solemn event on the occasion of the Day of Agricultural Workers was held at the Palace of International Forums “Uzbekiston”.

The President of the Republic of Uzbekistan Shavkat Mirziyoyev delivered a speech at the meeting.

More than 157 thousand representatives of the industry participated at the event through a videoconference.

The Head of our state sincerely congratulated all people of Uzbekistan on the Day of Agricultural Workers that is being celebrated in our country for the first time. 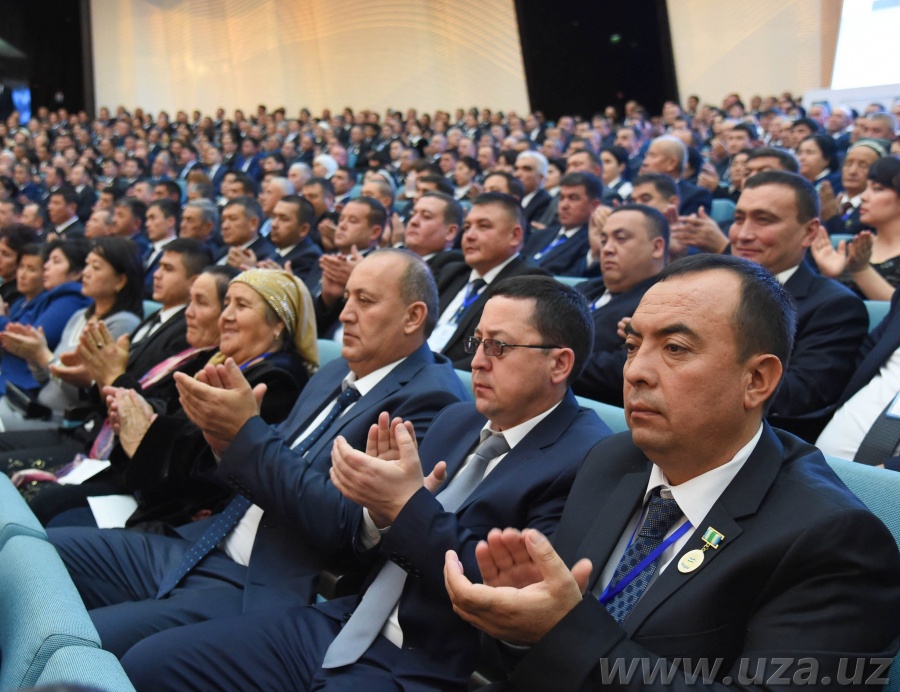 Experienced dehkans and farmers, water workers and machine operators, irrigators and agronomists, scientists of the sphere, gathered in this majestic palace, personify representatives of the most honorable professions in the world, said the President of our country. We are well aware of how complicated and laborious this work is and how sweet its fruits are.

Speaking about the dehkan, we imagine boundless fields and gardens, various gifts of nature on the table, weddings and holidays, joyful days, our whole life. Therefore, it will not be an exaggeration to say that the worker of the village is a strong pillar of life, a strong pillar of our existence, emphasized Shavkat Mirziyoyev. 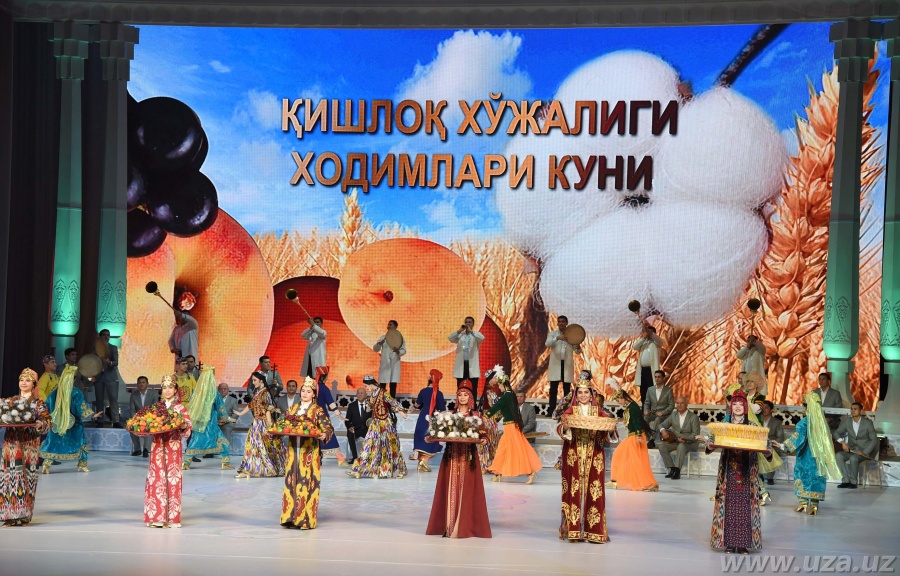 The great thinker Alisher Navoi also highly appreciated the work of dehkans. He said that the satisfying life and contentment of people are the result of work of selfless people, sowing fields and creating vital benefits.

In our country professional holidays of representatives of various spheres are celebrated, but there was no separate holiday in honor of those who feed and clothe all of us – agricultural workers. Therefore, the adoption of a special law establishing the Day of Agricultural Workers has become another fair decision, corresponding to wishes of our people, noted the Head of our state.

Today, an actual task is to analyze the results of reforms that are being implemented in the agrarian sector and to determine the most important measures for the next year.

As it was noted, more than 160 thousand farms have been formed in our country, which today are carrying out effective activities in more than ten areas as a result of development of the farmer movement in recent years. The number of multisectoral farms increased by 45 percent and reached 75 thousand over the past two years. This allowed creating hundreds of thousands of new workplaces in remote villages.

Cultivation of saffron was established in our country for the first time, soybean cultivation was expanded.

Within the framework of agricultural development programs, a number of farms have been established for fish farming, beekeeping, poultry farming, and the cultivation of large and small cattle. A new horse breeding complex was organized in Kashkadarya region in order to breed horses of Karabair breed and develop equestrian sport. Such complexes are being created in Tashkent region and other regions of our country.

Association of Beekeepers of Uzbekistan was formed for the development of another important direction – beekeeping – more than 14 thousand entrepreneurs engaged in production of honey became its members.

In our region, limited in water resources, it is very difficult to engage in agriculture, to obtain a high and qualitative harvest. Therefore, support is provided to farms and organizations that initiate the introduction of water-saving technologies, they are granted additional benefits and preferences. As a result, such technologies are now introduced in almost 240 thousand hectares, including drip irrigation technology – on 28 thousand hectares of land.

But these achievements are not an occasion for complacency, said the President of our country. There are still unoccupied opportunities in the sphere of agriculture, problems and shortcomings waiting for their solution.

One of the most important tasks is the efficient use of land. The area of irrigated crop lands of our country is only 3 million 300 thousand hectares and there is no possibility to expand it.

Another problem is deterioration of irrigation facilities, the failure of networks, which makes it difficult to irrigate 830 thousand hectares of land.

Providing the population with qualitative meat, milk, eggs, and fish products in sufficient quantities is among the main tasks. As the Head of our state noted, it is necessary to organize additional capacities for growing pedigree livestock, increasing the number of poultry farms in order to achieve this goal.

It was noted that it is necessary to expand the cultivation of fruit and vegetable products, provide qualitative delivery to the population, further intensifying the work on processing and export. Today only 15 percent of cultivated fruits and vegetables are processed in our country, and only 8 percent are exported. These figures do not correspond to the potential of Uzbekistan.

445 thousand hectares of the most fertile land are transferred to the population as household plots. But the use of these sites is at a low level. It is necessary to create compact greenhouses for the cultivation of citrus fruits on the household plots of the population, to arrange the harvesting of walnut, jujube seedlings and other crops.

The issue of improving the state of agricultural machinery remains actual. Of the 146 thousand 295 units of agricultural machinery in our country, 38% are completely obsolete. The districts specialized in production of fruits and vegetables are provided with machinery for processing orchards and vineyards, planting, growing and harvesting vegetables by only 34 percent. This leads to a decrease in productivity.

One of the serious problems is the backwardness of science, oriented to the development of agriculture, from the requirements of the present. In this regard, the President of our country noted the need for a sharp increase in the role and participation of scientific research institutes under the Ministry of Agriculture and Water Resources in development of agrarian science and breeding, development and introduction of advanced agricultural technologies, creation and placement of varieties of crops appropriate to the soil and climatic conditions of each region.

The material and technical base available in these scientific institutions today does not allow conducting modern research. There is a shortage of personnel in the sphere, who have thoroughly mastered modern scientific achievements. The need for veterinarians is especially high in livestock, poultry and fish breeding industries.

Considering all this, the Head of our state proposed to organize the Institute of Veterinary Medicine for forming a scientific approach to the sphere and organize training of qualified personnel.

The sphere of processing skins requires serious attention. The need to intensify the work on collection, deep processing of skins was noted, of which more than 12 million pieces are harvested in our country annually, as well as production of high-quality, competitive products.

President Shavkat Mirziyoyev proposed to organize a Scientific Center of Poultry Breeding in order to develop this branch in our country on scientifically based methods.

According to estimates, it is necessary to harvest an average of 50 thousand tons of qualitative potato seeds per year in order to fully meet the requirements for potatoes. The Head of our state noted that for this it is necessary to organize a domestic seed center and special enterprises equipped with modern laboratory equipment in cooperation with Netherlands, Poland, Russia and other countries.

It is necessary to pay special attention to increasing the incomes of farms based on effective use of their lands. It is estimated that if to plant vegetable and melon crops on the perimeter of the existing 2 million 625 thousand hectares of land with a length of 385 thousand kilometers, it will allow to grow an additional 415 thousand tons of products. Today, each farm can contain one cow, a total of 14 thousand head of cattle, an additional 50 birds and a total of 1 million 57 thousand birds can be grown in 21 thousand 125 farms, it is possible to get 7 thousand 200 tons of honey in 66 thousand farms due to organization of 329 thousand hives.

Another issue that requires a serious approach is the provision of light industry enterprises with high-quality fiber. In 2018, it is planned to completely process 1 million 200 thousand tons of cotton fiber and to arrange the export of finished products from it.

The Head of our state noted that it is necessary to increase the responsibility of managers of all levels, especially 4 sectors in the districts, for increasing efficiency in agriculture. All leaders – be the minister, the khokim of the region or the district – should work, taking the initiative, and be sure to achieve results in everything related to agriculture and ensuring food security.

The President of our country Shavkat Mirziyoyev solemnly presented the high awards of the Motherland to a group of our compatriots, which they were awarded on the eve of the Day of Agricultural Workers for the great achievements in the agrarian sector, a significant contribution to the development of the country’s agriculture and establishment of a unique school in the sphere.

The participants of the solemn event noted that they have sufficient forces and capabilities, knowledge and experience for implementation of plans and programs outlined by the Head of our state and will work selflessly for the prosperity of the country and the welfare of people.

A concert program of Uzbekistan masters of arts was held.